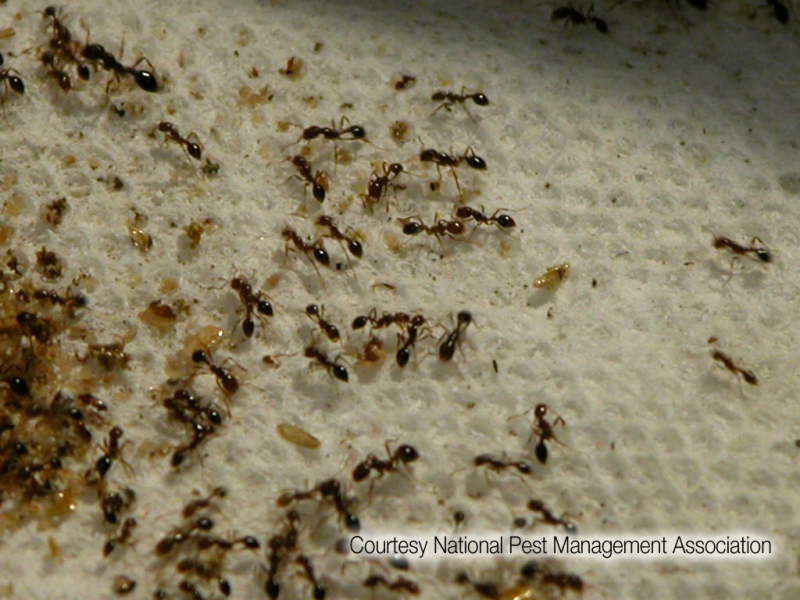 “Moisture ant” is a collective name for a group of wood invasive ants in the Acanthomycops spp. and Lasius spp.  Only those in of the Lasius spp. (known as cornfield ants in other areas of the country) are found in Washington.  They range in color from yellow to dark brown and sometimes are confused with carpenter ants.

Like all ants, moisture ants are social insects.  Colonies consist of a reproductive female (queen), reproductive males (drones), non-reproductives (workers), larvae, and eggs. For further information on general biology of ants, see the Ants Fact Sheet.  They are a monomorphic species, meaning that all their workers are the same size.  The size of a moisture ant is between three and five millimeters. Their maxillary palpi (antennae) are long and five to six segments.

Colonies are found in decaying logs and stumps, but can also be found in soil. As their name suggests, moisture ants prefer damp, moist areas to nest in. They will remove rotted wood to expand their nests, but they do not consume it as termites do.  They will create galleries by gluing the wood together with their saliva.  The galleries will house the larvae as they feed and grow.  Some colonies can persist for twenty years or more.  Reproductive swarming usually occurs in late summer to early autumn.

Moisture ants feed on sweet materials, including honeydew.  The workers often tend the aphids, who feed on plants, in order to collect honeydew from them.

Moisture ants are frequently associated with rotting wood in homes.  They can bring moisture into the wood to increase damage, but the wood must already be decaying before they can establish a colony.  Areas such as bathrooms, especially around drainage areas of bathtubs and toilets are susceptible because of the higher probability of water leaks.  They can also be found against foundations or under slabs.  Homes without vapor/moisture barriers in crawlspaces run the risk of invasion in Western Washington due to the high amounts of moisture in the soil year round.

Because moisture ants are attracted to decaying wood to nest in, it is important to make sure all wood is sound and that there are no water leaks.  If a leak is discovered, have the source sealed and repaired to prevent future leaks.  Any damaged or wet drywall should be replaced.  Depending on how damaged the wood is, it may need to be replaced as well.  Eliminate areas where wood comes in contact with soil.

Any chemical control measures act as a temporary solution.  By killing the ants it will help slow down the deterioration of the wood, but does not correct the moisture problem. Replacing damaged wood is the key ingredient to controlling moisture ants.