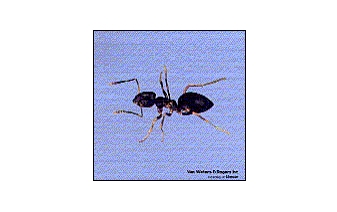 The odorous ant (Tapinoma sessile), also known as the odorous house or coconut ant for the scent it produces when crushed, is a serious nuisance species.  They are common throughout the United States.

They are a small (2.5  to 3.5mm) reddish-brown to black ant.  Workers are monomophic, meaning they are all the same size. They nest in a variety of places from woodlands to beaches, along rivers, and under stumps.  If they get into homes, they can infiltrate wall crevices, nest near heaters, water pipes, under carpets, and floors.  Colonies often consist of more than one queen, who will lay as many as 20-30 eggs a day, and may have as many as 10, 000 workers, making them difficult to eliminate.

Odorous ants in the outdoors will feed on dead insects, aphid honey dew, and residue from mealy bugs.  In homes though, they are opportunistic, going after most human foods, especially if they are sweet.  Their forage trails tend to be either meandering or set depending on the area.

Additionally, the odorous ant is very tough, and injured workers have been observed to continue living and working with little hindrance. Some queens with crushed abdomens could still lay eggs, and there are documented instances of T. sessile queens surviving without food or water for over two months.

They also appear highly tolerant to hot and cold temperatures. These ants are tough to remove from the body and leave an odorous smell as well.

Most damage from odorous ants comes from being an annoyance.  They will infest kitchens and pantries in search of food.  They will nest in insulation near heat sources; coming out of the heating ducts or hot water lines.

Due to the fact that odorous ant colonies have more than one queen, it is difficult to use sprays, such as Raid, against them.  It causes the colony to split and move elsewhere in the house.  It is best to call in a professional and allow them to handle the situation.

To prevent infestations, make sure all food products are in sealed containers, either plastic or glass.  Clean up any dropped or spilled food, remove grease from grease traps regularly, and fill in gaps around pipes or cables coming into the house.

Call Critter Control of Seattle for control solutions that solve odorous ant problems in the home.