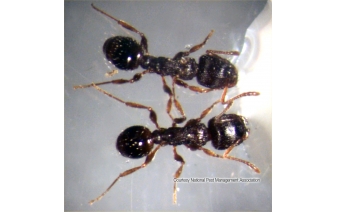 The pavement ant, Tetramorium caespitum, is a common household pest. The pavement ant is an introduced species and is one of the most commonly encountered house-infesting ants in Pennsylvania. The ants were likely carried to the United States in the holds of merchant vessels during the 1700s to 1800s. These ships were filled with soil from Europe to provide ballast on the trip to the States. Once in port, the soil was removed, and goods were loaded on the ships to carry back across the Atlantic.  Their name comes from the fact that they usually make their homes in pavement.

They are distinguished by one spine on the back, two nodes on the petiole, and grooves on the head and thorax.  During early spring, colonies attempt to conquer new areas and often attack nearby enemy colonies. These result in huge sidewalk battles, sometimes leaving thousands of ants dead. Because of their aggressive nature, they often invade and colonize seemingly impenetrable areas. In summer time the ants dig out the sand in between the pavements to vent the nests.

The pavement ant is dark brown to blackish, and 2.5–4 mm long. Like other ants there are the workers, alates, and a queen. Alates, or new queen ants and drones, have wings, and are twice as large as the workers. The drone's only job is to mate with the queen, and reproduction is at its highest in spring and summer. Tetramorium, like many other ants have nuptial flights where drones fly high up in the air and mate with new queens. The queen finds a suitable nesting location and digs a founding chamber. As the eggs hatch and the ants develop, they will spend that time, about two to three months, tending to the queen of their colony.

They will continue helping in the colony until they are a month old. Older workers hunt and defend the colony. Pavement ants will eat almost anything, including insects, seeds, honeydew, honey, bread, meats, nuts, ice cream and cheese.

The pavement ant can nest indoors in walls and under floors. Pavement ant workers enter houses to forage and can become a nuisance when large groups infest a kitchen or garden patio.

The species does not pose a public health risk, but can contaminate food and should be avoided. They are not aggressive, but they can sting and bite. The nests of pavement ants are difficult to locate, so the most efficient way to manage an infestation is to contact a pest control professional.

Control of pavement ants should begin with an attempt to locate the nest site. Ants entering buildings from outdoors can be discouraged by sealing as many cracks and gaps in exterior walls as possible. Also, correct poor foundation drainage and repair water leaks.

Control of foraging pavement ant workers can be accomplished through the use of baits. The workers carry the baited material back to the nest, eliminating the colony. Many different types of bait are available to the homeowner in this regard. However, baits containing hydramethylnon, fipronil or boric acid are slower acting and do not kill the workers before they have had a chance to share the baits with the queen and developing immature ants.