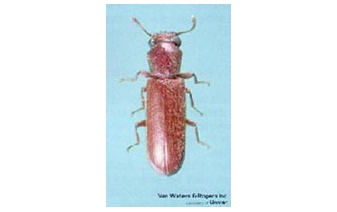 Attack by these pests is characterized by small-to-medium-sized holes in the infested wood where adult beetles have emerged. In severe infestations, the wood looks as if it has been subjected to birdshot-sized shotgun pellets.

Most of the wood-boring beetles found in structures in the Northwest belong to the family Anobiidae. Anobiids typically are pests of softwoods, such as Douglas-fir, hemlock, and cedar, but certain species occasionally may be found in hardwoods like maple, walnut, and oak.

Of this family, the western deathwatch beetle (Hemicoelus gibbicollis) is responsible for most of the damage to wooden structures along coastal areas of western North America. They are common in crawl spaces, basements, and pole barns having a moisture content of 13-18%.

Typically, adult beetles lay eggs in cracks and depressions of structural timbers.  Upon emergence, larvae bore into wood and may feed for 5 or 6 years or longer.

Eventually they work toward the surface, pupate, and emerge as adults during summer. The cycle will continue until all available nutrition has been depleted. Often, only powdery frass is all that remains of a wooden timber.

Deathwatch beetles are rarely seen, but their signs can be quite apparent.  Numerous piles of frass may accumulate on floors or wooden ledges.  Occasionally, timbers are so severely weakened they will no longer bear heavy loads.  Hundreds of pinhead-size beetle emergence holes found on infested timbers may indicate either an old or current infestation.

Control of anobiids involves replacing severely damaged wood and eliminating conditions that cause the wood to become moist.  Researched conducted in the 1990s found sodium borates were highly effective against structure-infesting anobiids.  Eggs and newly emerging larvae usually do not survive.  However, it may take several years for all existing larvae present in an infested structure to ingest a lethal dose.  Borate treatments applied before May will have the greatest effectiveness against eggs and newly hatched larvae.