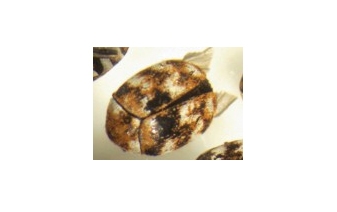 The black carpet beetle, (Attagenus unicolor), is the most common and most destructive of the five important species of carpet beetles in the United States. It damages household products containing keratin, a principal protein found in animal hair and feathers, plant products such as cereals and grains, as well as synthetic fabrics not derived from animal matter. Dried insect specimens, such as those found in insect collections, are also devoured.

Adults are dark brown or black and are oval shaped and 1/8 to 3/16 inch in length. This stage feeds outdoors on pollen and nectar, migrating indoors to lay eggs about a week after emergence. Adults can live 9 months to 3 years depending on food availability and other environmental factors. Females lay about 50 small, white eggs which hatch in six to ten days. Eggs are deposited in lint, cracks, and other areas near larval food supply where they are rarely seen.

The larva is the damaging stage of this beetle. The cigar-shaped larva is long and narrow with short, stiff hairs on a dark brown to black body. Long, bristle-like tails are visible on older larvae. A larva may grow 1/2 inch long while undergoing 5 to 11 molts. Cast larval skins are often seen on infested fabrics and can easily be mistaken for living larvae. The larval stage may require 3 months to nearly 2 years in order for pupation to occur. The black carpet beetle pupates in its last larval skin after the majority of larval feeding and growth occurs. The pupal stage lasts 6 to 24 days.

The black carpet beetle is considered a general feeder but economic damage primarily occurs on fabrics in the household. They are known to eat large, irregular holes through any acceptable food material. They prefer to feed on the surface of wool products while hairs are cut at the base of furs leaving bare spots on the hide. On most fabrics the nap is usually consumed leaving the base threads intact. Additionally, the black carpet beetle may be a pest of stored products when it invades containers of cereals, nuts, and stored grain. Damages caused as a result of black carpet beetle infestations render most fabrics aesthetically unappealing and useless. Furthermore, those in close association with black carpet beetles may suffer allergic reactions as a result of exposure to beetle fragments, cast skins, or dust.

Black carpet beetles can be detected by close inspection of susceptible household goods. Depending on the value of the infested product, some may opt to discard the product while others may choose control options in an effort to salvage the goods.

Vacuuming may be used to remove debris such as animal hair and lint that serves as a food source.  When located, infested articles should be disposed of. However, if the item is of high value, several options are available. Items such as furs can be placed in cold storage at temperatures around 40°C. Also, some items may be frozen for a week in an effort to kill all beetle larvae.

In the case of a heavy infestation, insecticide treatment may be necessary.