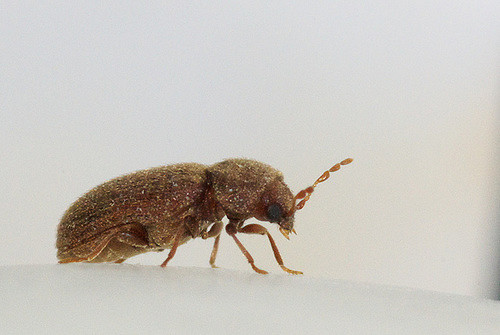 The Drugstore beetle, Stegobium paniceum, also known as the Bread beetle or Biscuit beetle, is a tiny, brown beetle that can be found infesting a wide variety of products, and is among the most common non-weevils to be found there. They have a worldwide distribution and can be more commonly found in warmer climates.

The drugstore beetle, Stegobium paniceum, is brownish, approx. 1/8 inch long, with the head bent downward giving the insects a humped appearance. It is an aptly named insect, since it not only feeds on most foodstuffs and animal products but also has been found infesting certain drugs and toxic materials. It will burrow through wood to get to food sources.

There are from 1-4 generations per year depending on environmental conditions such as temperature and food availability. Food quality is not as important as one might expect, since the pest has symbiotic organisms in its digestive tract that resemble yeasts that manufacture many “B” vitamins.  Therefore, they can survive on low-quality foods.

The drugstore beetle (Stegobium paniceum) feeds on almost anything of vegetable origin, including a great variety of stored foods, seeds, breakfast cereals and the like. It gets its name from the habit of feeding on almost all drugs found in pharmacies.