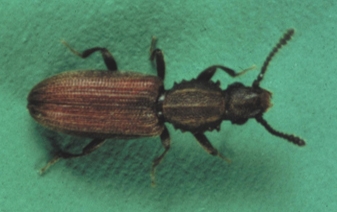 The saw-toothed beetle, Oryzaephilus surinamensis, as adults are very flat, narrow, dark brown in color and 0.1 inch long. They are recognized by the saw-tooth projections on the sides of the middle segment. Larvae are white to pale yellow and 0.1 inch at maturity. They are similar to the merchant grain beetle in appearance and habits. In the saw-toothed grain beetle the temple region behind the eye is greater than 1/2 the eye diameter, in the merchant grain beetle the space behind the eye is less than 1/2 the eye diameter

The habits and development of the two species are similar. The merchant grain beetle, however, is less cold tolerant and lays only about one-half to two-thirds as many eggs as does the saw-toothed grain beetle. The merchant grain beetles can fly; thus they can be introduced into new grain from contaminated grain through flight as well as walking. The adults of the saw-toothed grain beetle, on the other hand, cannot fly and must be introduced from contaminated grain.

Adults live an average of six to ten months, but can live as long as three years. The females lay between 43 and 285 eggs during their lifetime. Eggs are dropped loosely among grain kernels or tucked into a crevice in a kernel. The tiny eggs are slender and white, and hatch in three to five days when environmental conditions are optimal (80° to 85°F).

The larvae emerge and crawl freely about the grain to feed on broken kernels. Larger larvae may tunnel into kernels to feed. Larvae mature in about two weeks, and construct cocoon-like coverings by joining together small grains or pieces of grain. Within these structures the larvae pupate. The pupal stage lasts about a week. Total development from egg to adult requires about three to four weeks.

Although broken kernels are the preferred food of both species, sound kernels will sometimes be penetrated and fed on. The dry weight of grain may be reduced, but total weight may increase because of water absorption caused by the metabolic processes of insect populations. Molds may begin to grow on the gain, further reducing grain quality and value. The presence of live insects and/or insect parts can also result in reduction of grain value. In some cases, grain can be rejected at the terminal.

Prevention is the best strategy to avoid insect problems in stored grains. Proper bin sanitation before introduction of new grain minimizes the need for pesticides. Good sanitation involves the removal of old grain and dust in and around the gain bin. This includes removal of old grain from corners, floors, and walls. Any grain remaining when a bin is emptied can harbor insect infestations which will move into the new grain. Grain that is to be stored for longer than six months may need a protective application of an approved insecticide.

Grain placed in a clean bin should be checked at two week intervals during warm months and at one month intervals during cooler months for the presence of hotspots, moldy areas, and live insects. If any of these conditions exist, the grain should be aerated to lower the moisture level and temperature.

Fumigation should only be used as a last resort. Because of the high toxicity of registered fumigants and technical knowledge needed for their proper use, a qualified pesticide applicator should be contacted if fumigation is required.