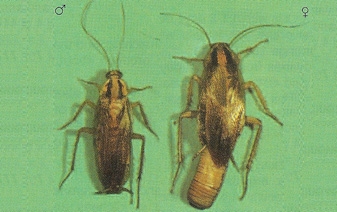 The adult is 1/2 inch long, pale brown, with two dark brown lengthwise stripes on the shield behind the head.  Under ideal conditions, adults live up to 12 months.  The German cockroach is successful because of the large number of nymphs produced from each egg case, the short period between birth and sexual maturity (about 4 months), and their ability to easily hide due to their small size. The mother also carries the egg case (called an ootheca) with her during the germination period, rather than depositing it like other species, a practice which would leave them vulnerable in a human habitat to zealous attempts to wipe them out. A female produces four to eight egg cases during her lifetime, each case containing 30-48 eggs.  This cockroach is also smaller than many other species so it can more easily hide and fit into very small cracks and crevices to evade humans.

The German cockroach is omnivorous and a scavenger. They particularly like starch, sugary foods, grease and meats. In certain situations where there is a shortage of foodstuffs, they may eat household items such as soap, glue and toothpaste or they may even turn cannibalistic, often chewing on the wings and legs of each other

Cockroaches mechanically transmit numerous diseases.  Cockroaches produce odorous secretions that can affect the flavor of various foods and have also been implicated in the transmission of diseases. Disease-producing organisms such as bacteria, protozoa, and viruses have been found in cockroach bodies. Different forms of gastroenteritis (food poisoning, dysentery, diarrhea, etc.) appear to be the principal diseases transmitted by these cockroaches. These disease-causing organisms are carried on the legs and bodies of cockroaches, and are deposited on food and utensils as cockroaches forage. In addition, there is ample evidence implicating cockroaches in the transmission of hospital acquired diseases.

If you are suspecting an infestation involving German cockroaches, give Critter Control of Seattle a call!