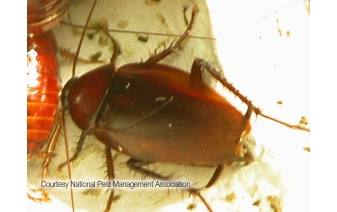 The oriental cockroach, Blatta orientalis, are often called water bugs because of their preference for dark, damp, and cool areas such as those under sinks and washing machines, and in damp basements. This species, which is less wary and more sluggish than the others, often travels through sewer pipes and lives on filth.

Adult Oriental cockroaches are about one inch in length. Both male and female adults are very dark brown, nearly black; their bodies usually have a somewhat greasy sheen. Females have small, functionless, rudimentary wing pads and broader, heavier bodies. Males have wings that cover only about three-quarters of their abdomen. Egg cases are dark reddish brown, 1/2 inch long, and appear to be slightly inflated.  From 8 to 15 egg cases are produced per female, each case containing 16 eggs.

Nymphs and adults have similar habits and are found with decaying organic matter indoors and out. They can be found outdoors in abandoned cisterns and water valve pits; in yards; beneath leaves; in bark mulch around shrubs, flowers, and foundations; stone walls, and crawl spaces; and in garbage and trash chutes. Both nymphs and adults are sluggish and are usually situated at or below ground level indoors.

At times large numbers occur in one great mass around leaks in the basement or crawl space areas of homes. They may enter the home in food packages and laundry, or merely come in under the door or through air ducts, garbage chutes, or ventilators.

Oriental cockroaches feed on all kinds of filth, rubbish, and other decaying organic matter. They seem especially fond of garbage and the contents of discarded tin cans. If water is available, they can live for a month without food; without water they die within two weeks.

The most important aspect of cockroach damage derives from their habit of feeding and harboring in damp and unsanitary places such as sewers, garbage disposals, kitchens, bathrooms, and indoor storage areas. Filth from these sources is spread by cockroaches to food supplies, food preparation surfaces, dishes, utensils, and other surfaces. Cockroaches contaminate far more food than they are able to eat.

Different forms of gastroenteritis (food poisoning, dysentery, diarrhea, etc.) appear to be the principal diseases transmitted by Oriental cockroaches. The insects carry these disease-causing organisms on their legs and bodies and deposit the organisms on food and utensils as they forage. Cockroach excrement and cast skins also contain a number of allergens, to which many people exhibit allergic responses such as skin rashes, watery eyes, congestion of nasal passages, asthma, and sneezing.