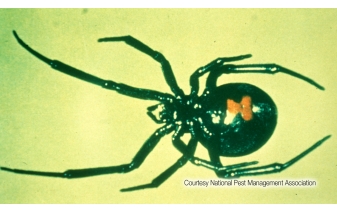 The black widow spider, Latrodectus mactans, is widely distributed over the warmer portions of the United States. The common name “widow spiders” is sometimes applied to members of the genus due to the supposed habit of the female of eating the male after mating. Although the males of most species are not usually eaten after mating, theuycan even go on to fertilize other females.

Females are easily identified because of their globular, shiny black abdomen with two reddish or yellowish triangles on the underside. These reddish or yellowish triangles form a characteristic hourglass marking. The abdomen is about 1/4 inch in diameter, but may be as large as 1/2 inch when the female is full of eggs. Males are much smaller and lighter colored, with light streaks on their abdomens.

The black widow’s web is an irregular mass of fibers with a small central area to which the spider retreats while waiting until its prey becomes ensnared. These webs are frequently constructed underneath boards, stones, along foundation slabs, behind shrubs, and especially where brick or wood siding extends close to ground level. This spider does not usually enter residences, though it may do so occasionally.

Black widows are considered a nuisance in a structure; however, the major damage that black widows create is through their bite. Black widow spider venom contains toxins that are neurotoxic (toxic to the nervous system).

The severity of a person’s reaction to the bite depends on the area of the body where the bite occurs; the person’s size and general sensitivity; the amount of venom injected; the depth of the bite; the seasonal changes in venom potency and the temperature.

The bite produces a sharp pain similar to a needle puncture, which usually disappears rapidly. After a variety of other symptoms, convulsions and death may result for some victims, especially if the person is sensitive to the venom and no treatment is received. An anti-venom for the black widow is readily available to most physicians.

To control the black widow, carefully remove all materials where they might hide. Eliminate as much clutter as possible in storage areas and frequently dust and vacuum around windows, corners of rooms, and under furniture. Trim weeds around the building foundation and remove debris to discourage insects and spiders from living next to a structure. Seal openings and install screens and door sweeps to prevent spiders (as well as other unwanted pests) from moving indoors. Use a vacuum cleaner to remove webs, spiders and their egg sacs.

The applications of insecticides are another avenue to control black widows. There are traditional and green products that can be used exteriorly and interiorly to keep these creepy-crawlies away.