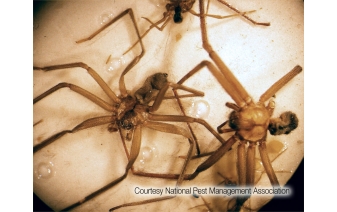 The brown recluse spider, Loxosceles recluse, is a species of spider that is very rare in the Pacific Northwest. It is native to the United States from the southern Midwest south to the Gulf of Mexico. The native range lies roughly south of a line from southeastern Nebraska through southern Iowa, Illinois, and Indiana to southwestern Ohio. In the southern states, it is native from central Texas to western Georgia and north to Kentucky.

The brown recluse is a soft-bodied and secretive species found in homes and other outbuildings. The adult body varies from 1/3 to 1/2 inch in length, with the arrangement of the legs producing a larger overall size of 1 inch in diameter or greater. The body is yellow to dark brown and has a rather distinctive, darker brown violin-shaped mark on the top of the cephlathorax and a distinctive eye pattern.

The brown recluse is usually found indoors, particularly in bathrooms, bedrooms, closets, garages, basements, and cellars. In homes with forced-air heating and air conditioning, and mostly above-ceiling ductwork, brown recluse spiders are commonly found harboring in or around the ductwork or registers. They may also be present in attic areas or other locations above the ceiling. They are also commonly found in cluttered closets or basements and in outbuildings where miscellaneous items are stored.

This venom is a collection of enzymes. One of the specific enzymes, once released into the victim's skin, causes destruction of local cell membranes, which disrupts the integrity of tissues leading to local breakdown of skin, fat, and blood vessels. This process leads to eventual tissue death (necrosis) in areas immediately surrounding the bite site.

The venom also induces in its victim an immune response. The victim's immune system releases inflammatory agents-histamines, cytokines, and interleukins-that recruit signal specific disease-fighting white blood cells to the area of injury. In severe cases, however, these same inflammatory agents can themselves cause injury. These secondary effects of the venom, although extremely rare, can produce these more significant side effects of the spider bite: destruction of red blood cells, low platelet count, blood clots in the capillaries and loss of ability to form clots where needed, acute renal failure (kidney damage), coma and death.

One control measure for the brown recluse spider is exclusion. Sealing up gaps, cleaning the structure, and reducing harborage around the house would help limit your encounter with the spider.

Due to the emphasized fear of these spiders due to increased public awareness, extermination of domestic brown recluses is performed frequently in the lower Midwest. Very little is known on how to exterminate them without extreme measures. This is largely due to a variety of adaptations, including the abilities to maintain homeostasis for several seasons with no food or water and to survive after losing limbs. Also, the spiders survive significantly longer in a relatively cool, thermally stable environment.

Many chemicals which have proven effective have now been made illegal or restricted in the U.S., making the use of chemicals to eradicate the spiders impractical, and there is no known procedure proven to be entirely effective, safe, and legal. Chemicals that do not kill the spider will cause its nervous system to break down partially, inducing undesirable aggressive behavior; thus setting the stage for a brown recluse bite.