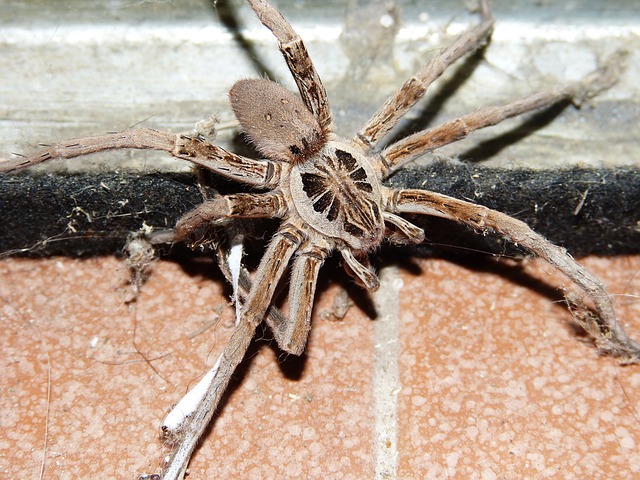 Wolf spiders are members of the family Lycosidae, from the Ancient Greek word meaning "wolf". They are robust and agile hunters with good eyesight. They live mostly solitary lives and hunt alone. Some are opportunistic hunters pouncing upon prey as they find it or even chasing it over short distances. Some will even wait for passing prey in or near the mouth of a burrow.

Wolf spiders can be found in a wide range of habitats both coastal and inland. These include shrublands, woodlands, wet coastal forest, alpine meadows, and suburban gardens. Spiderlings disperse aerially and consequently wolf spiders have wide distributions. Although some species have very specific microhabitat needs (such as stream-side gravel beds or mountain herb-fields) most are wanderers without permanent homes. Some build burrows which can be opened or have a trapdoor. Arid zone species construct turrets or plug their holes with leaves and pebbles during the rainy season to protect themselves from flood waters.

The wolf spider is a simple metamorphosis creature. They lay eggs and their offspring look very similar to the adults except for being smaller. A wolf spider sheds its skin several times as it grows to an adult.  Most wolf spiders live for several years.  In many species, female wolf spiders lay dozens of eggs at a time and wrap them in a large ball of silk.  The female will then carry the egg sac on her abdomen until the spiderlings hatch.  Upon hatching, the spiderlings will live on the mother's back for a few weeks until they are large enough to hunt on their own.

There are many genera of wolf spider, ranging in body size from less than 1 to 30 millimetres (0.04 to 1.18 in). They have eight eyes arranged in three rows. The bottom row consists of four small eyes, the middle row has two very large eyes, and the top row has two medium-sized eyes. They depend on their excellent eyesight to hunt. They also possess an acute sense of touch.

Their eyes reflect light well, allowing someone with a flashlight to easily hunt for them at night. Flashing a beam of light over the spider will produce eyeshine. The light from the flashlight has been reflected from the spider's eyes directly back toward its source, producing a "glow" that is easily noticed. This is also especially helpful because the wolf spiders are nocturnal and will be out hunting for food, making it easier to find them.

In most cases, wolf spiders benefit humans by feeding on all sorts of insects, including crop pests.  Wolf spiders are rarely pests, but they sometimes wander into houses, where their large size often frightens homeowners.  Wolf spiders can bite, but their bites are extremely rare and no more dangerous or painful than bee stings.  In fact, bees and wasps are more dangerous than wolf spiders because a wolf spider will never "attack" a person, unlike bees or wasps that will attack to defend a hive.  Wolf spiders will only bite if they are handled.  Wolf spiders that are found indoors have wandered in by mistake and should be collected and released outdoors.

Thorough inspections are necessary to find all spider harborage, such as in landscaping, indoors or under the home, for later sanitation, removal or insecticide treatment. Space treatments of insecticides are often useful for cleanouts and for eliminating outdoor species that may be found indoors.

Long-term residual control of spiders is difficult to achieve. All areas where the spiders have been found should be treated, paying particular attention to dark corners. Dusts are especially useful for treating inaccessible void areas, crawlspaces and attics.