Bats have been treated with superstition and fear in many cultures throughout history due to their nightly flying habits, strange appearance, and the tendency of certain species to feed on the blood of other animals. Over 1,200 species of bats exist in the world and fewer than five bat species actually feed on blood. On the contrary, most bats are actually insectivores whose feeding habits are incredibly beneficial to humans. Large bat colonies have been known to even eat up to half a million pounds of insects every night. The primary diet of bats is insects like mosquitoes, flies, cockroaches, beetles, and moths. Bats hunt these insects by using their large ears as radar dishes, which is commonly called echolocation. 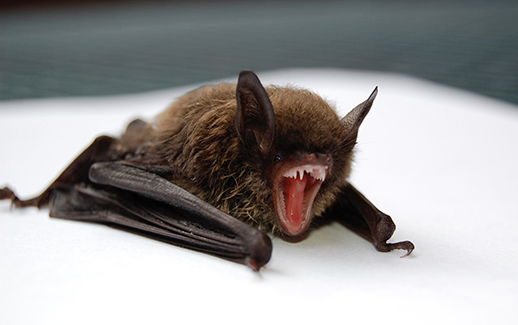 The most common bat species in the United States are quite small, with average wingspans that range from 9"–15". Seattle is home to over a dozen types of bats, including the little brown bat and big brown bat. Each bat shares common physical traits that are unique to these flying critters, such as wings that are actually broad webbed hands, short legs with sharp claws, large ears, and the ability to make high-pitched squeaks that aid in navigation and communication. Bat fur ranges from light tan or yellow-tinted to dark brown and black. Most species of bats in North America lack good eyesight and have pretty small eyes, but they make up for their lack of sight with their hearing.

As nocturnal creatures, bats spend most of their time hiding out in caves during the day. Bat colonies have been known to number in the millions. Bats use their feet to dangle upside down on cave ceilings, hollow trees, and buildings as they sleep.

Upon dusk, bats will wake up and fly out of cave mouths. Bats like to roost near ponds or lakes or other bodies of water to find adequate food (like mosquitoes). Bats rarely land on the ground because their legs are too weak to hold up their bodies.

Do bats get into homes or yards?
Outside, bats are found roosting in hollowed out trees and bat boxes. Inside your Seattle home, bats most often make themselves comfortable in your attic or crawlspace, or inside outbuildings like barns. During warmer months when baby bats are learning how to fly, they can get into homes by accident through openings in doors or windows.

Are bats a danger to people or property?
For the most part, bats and humans coexist peacefully with one another. One of the biggest problems from bat populations is the bat feces (guano) that gathers. In some areas, guano is actually considered a sought-after fertilizer, but for most people, it is something that needs to be removed as it can pose health hazards to pets and humans. Bat guano can grow dangerous fungal spores. These spores are easily transmitted through the air, resulting in a respiratory disease known as histoplasmosis.

Bats are known carriers of rabies, and although many do not actively carry the disease, it's dangerous to risk handling them. In order to keep a single bat or bat colonies from roosting in attics, our technicians will take proper precautions to seal all vents, holes, chimneys, windows, and gaps on the side of homes.

Bats tend to bite and scratch when they feel threatened and can easily injure you and your family. Due to the risk of infection from these wild critters, we don't recommend you handle bat removal yourself. Critter Control of Seattle's technicians are trained to safely remove any bat problems in your King County home or business.

We can help you get rid of bat problems. Call Critter Control of Seattle today!

Request a Quote
Bats
Bats in the belfry, attic, basement or chimney? Scratching or scurrying noises in the ceiling? Foul odors in your home? Critter Control can help eliminate bats in your home and prevent them from re-entry. Call your local Critter Control office today at 206.431.6833 for effective bat removal services.