Crows are intelligent and adaptable birds, part of the corvid family that ravens and magpies also belong to. Human behavior in Seattle over the past 40 years has created an environment in which the large black birds thrive. A decrease in trees has led to open areas for foraging, which crows are fast to take advantage of. Crows are social and their flocks, known as murders, can cause noise pollution and crop damage.

Corvids are considered to be some of the smartest birds in the world, and as such, crows are also quite capable. Crows have been observed creating tools to catch bugs, store food, and work as a team to keep predators away. They've also been subjects of intelligence tests and are believed to be able to distinguish between human faces. Unfortunately, this intelligence means crow control can be difficult. 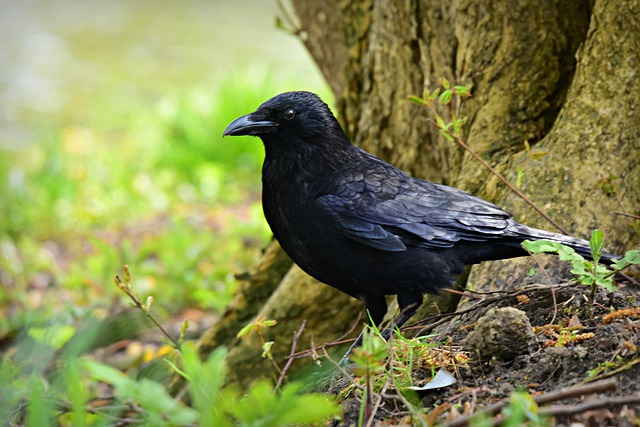 Crows are entirely black, including their feet and bills. A fully-grown crow weighs about a pound and has iridescent black feathers. Many people are unable to tell the difference between a crow and a raven, but there are some easily-spotted differences between the two, including the shape of the tail—crow tails are more rounded, shaped like a fan and raven's tails are more of an angular wedge when flying.

American crows are fairly large birds, with a wingspan of up to 36 inches. Crows are also easily identified due to the unique cawing sounds they produce.

Where Do Crows Live?

American crows typically reside in areas with ample open field space for foraging and plenty of nearby trees for roosting. Because of this, crows are usually found in open areas like parks, cemeteries, farmlands, and orchards.

Do crows get into homes or yards in Seattle?
Crows are mostly found in outdoor settings, rather than inside homes. Crows are commonly found in suburban and urban areas, so they are regularly found in Seattle neighborhoods. Crows, like many birds, thrive in human-inhabited areas because their preferred food sources can often be found in gardens, trash cans, public garbage dumps, and, in the case of carrion, along roadsides. Crows will also invade yards and parks to roost in trees.

Are crows dangerous? Can crows harm your property?
The majority of damage caused by crows comes in the form of damaged property. The main reason they are considered pests to Seattle homeowners is their persistence. So what do crows eat? foraging activity is harmful to seedlings and ripening crops. Big crow flocks can also cause damage to trees and other sites when they look for a place to roost. In addition, their loud noises create upsetting noise pollution, and their droppings produce unpleasant odors and can even facilitate the spread of diseases like histoplasmosis.

Can Critter Control of Seattle Get Rid of Crows?

In order to effectively control crow populations, you must act quickly. Crows can be hard to get rid of once they're established in the area.

Because crows gather and roost in such large numbers populations, they are difficult to remove—especially for untrained homeowners. In fact, DIY crow removal can actually make the problem worse by encouraging the birds to move to a location that may be even more inconvenient for you. Call the professional crow control technicians at Critter Control of Seattle for effective crow removal services. Our professional wildlife removal technicians will handle your crow problem safely and humanely.

We can get rid of crows and protect your Seattle area property. Call today!

Request a Quote
Crows
The true crows are in the genus Corvus; they are large Passerine birds. As a collective group, crows show exceptional intelligence; it would be appropriate to classify crows as being to birds what higher primates (including humans) are to mammals.
Call Us Today For An Onsite Estimate
253.343.0412
(No Cats & Dogs)