The presence of pigeons has been affecting human history for more than 5,000 years, as demonstrated by Mesopotamian cuneiform tablets and Egyptian hieroglyphics that mention the domestication of the bird. Charles Darwin used pigeons to formulate parts of his Theory of Evolution, and modern-day people raise them for food, to race, and for the delivery of messages. Despite all the ways pigeons can be utilized for human needs, the birds are considered the most common avian pest. 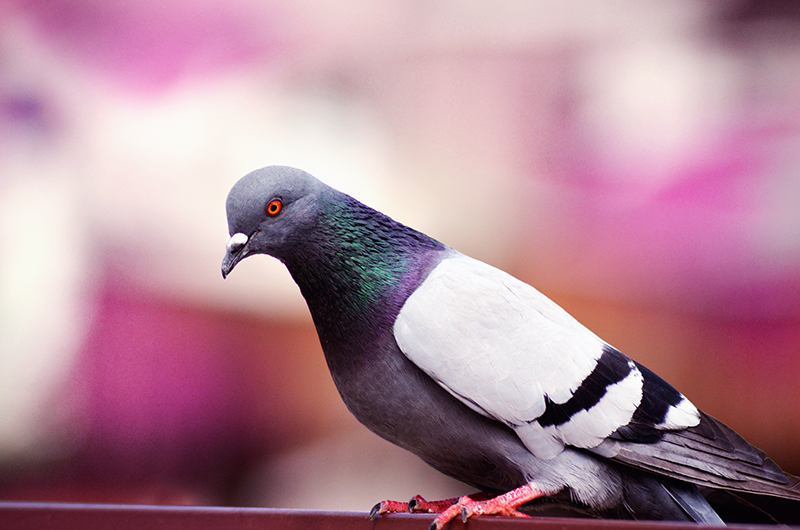 Pigeon bodies are traditionally gray with a whitish rump, but the birds may also appear in shades of white, tan, and black. They have characteristic double black stripes on their wing feathers, a single black band on their tail feathers, and bright red feet. The average pigeon weighs 13 ounces (369 g) and measures 11 inches (28 cm) in length.

Native to Europe, North Africa, and India, pigeons were introduced to the United States as a domestic species of bird and now hold widespread distribution throughout the North American continent. They are found in 49 of the 50 States, Southern Canada, and across Mexico. Dependent on human activity for sustenance, pigeons are cosmopolitan in distribution and build nests of sticks, twigs, and grasses in lofts, steeples, attics, caves, parks, warehouses, on bridges, and anywhere architectural features allow for roosting.

Dependent as they are on humans, pigeons orient themselves near areas of consistent activity. They commonly nest in ornamental lawn trees, barns, attics, and on roofs of residential homes. Since their preferred food sources include grains and seeds, garbage, the manure of livestock, insects, and nearly anything people will feed them, pigeons are also commonly found on farms, in places of business, and storage facilities like feed mills and grain elevators.

Pigeons are actually quite filthy animals. Their droppings are abundant wherever infestations are present and stain building facades, park benches, statues, and cars. In addition to being aesthetically displeasing, pigeon droppings accelerate deterioration of building materials and are malodourous. Furthermore, their excrement contains pathogens of numerous diseases, including ornithosis, encephalitis, toxoplasmosis, and food poisoning. The birds can also harbor fleas, lice, mites, and ticks in their feathers and consume and contaminate stores of food meant for human and livestock consumption.

Since they are drawn to nesting sites where food is abundant, pigeon control must center on the elimination of food sources. To keep pigeons out of parks, feeding should be strictly regulated. To keep the pests out of residential yards, property owners should seal trash bins, remove collections of debris, and trim trees and shrubs. Additionally, a number of products exist to keep pigeons from nesting on structures. Mesh netting and bird spikes, for example, can both be utilized successfully to stop the birds from nesting on roofs, in barns, steeples and on building ledges.

As pigeons spread a number of diseases, individuals are safer not approaching them. In areas where pigeon infestations threaten the general public's health and well-being, pest control professionals should be called in to handle the problem. The trained technicians at Critter Control have the tools and knowledge of pigeon behavior to effectively and safely remove the birds.

Request a Quote
Pigeons
Pigeons in the attic or on the roof? Those pesky rock doves leaving droppings all over are common pigeons. Pigeons are notorious for causing significant damage to buildings, vehicles, property and machinery with their excessive droppings. Not only do pigeon droppings cause odor and aesthetic problems in public places, droppings can also increase the rate of building destruction.