Swallows have a reputation for being both beneficial and pestilential. North America is home to several common species, including barn swallows, cliff swallows, and tree swallows, as well as less prominent types, like cave and mangrove swallows. Although they are appreciated for the pest insects they eat, swallows gather in large numbers, damage private properties, and wreak havoc on farming operations. 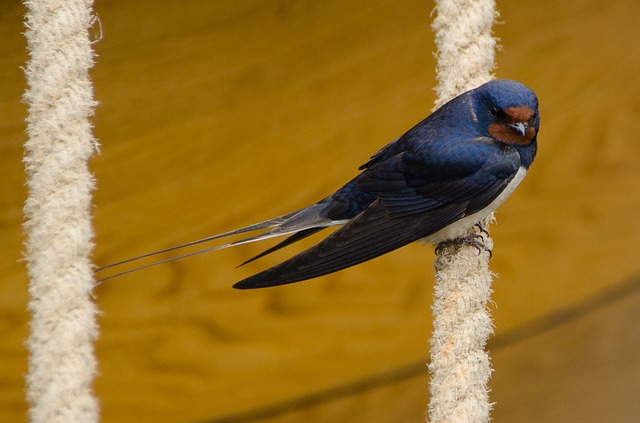 Though they are distinguishable by their flattened, short beaks, most species of swallows vary in appearance. For example, cliff swallows grow to be approximately 5 inches long and weigh just under an ounce. They have red faces, brown undersides, and white foreheads. Barn swallows are similarly sized, though they are steel blue with reddish-brown undersides and rusty colored necks.

Species of swallows normally live near water since they use mud to build nests and as a source of nourishment. Barn swallows prefer to nest in meadows and farmlands, avoiding cluttered spaces like forests, and return to their summer homes after each migration season as long as abundant food and shelter remain available. Cliff swallows are more prominent in the western parts of North America and are known for nesting under cliff overhangs.

Swallows are notorious for using buildings as nests. Some species nest in chimneys, while others, like the barn swallow, enjoy utilizing more roof space. Cliff swallows require overhead cover and flat supportive surfaces to build their preferred nests, which make building eaves prime roosting locations for the birds.

Problems typically stem from the swallow's proclivity to form large groups called colonies. Cars and farm equipment are often damaged by swallow droppings, and farmers also report significant livestock feed losses when the birds form large colonies nearby. The birds do not typically physically threaten humans, though mothers will swoop to stave off predators that get too close to their offspring.

Property owners can employ several exclusion methods to control swallow populations. Porcupine wires, for example, can be placed on favorite roosting spots to keep the birds away. Reducing insect populations and removing standing water in the area also proves helpful. Leaving problems alone only invites more birds to join colonies, though they are protected under the Migratory Bird Treaty Act, which makes action difficult.

The safest and legal way to regulate swallow populations is to call professional removal services. Critter Control teams stand ready to use our integrated pest management approach. This entails surveying areas in order to exclude and remove swallows from private property. Our services keep citizens free from fines and the risk of contracting deadly diseases.

Request a Quote
Swallows
Swallows are part of the family Hirundinidae and are characterized by their adaptation to aerial feeding.
Call Us Today For An Onsite Estimate
253.343.0412
(No Cats & Dogs)