Though they are often referred to as meadow mice, voles are not actually mice at all, despite the similarities they share. Voles are small furry rodents with a fondness for digging tunnels and devouring their body weight in plant matter every day. They are prolific breeders capable of increasing in number faster than predators can eat them. The damage they cause to yards and gardens is often mistaken for the work of moles, mice, or rabbits. As voles are adept burrowers, direct contact with humans is rare. 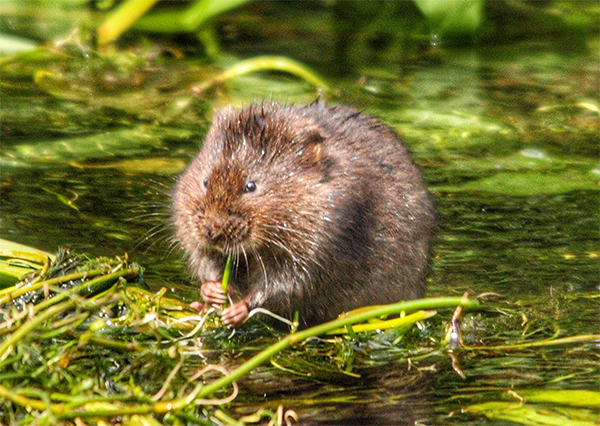 Voles are short and stout, with dense gray or brown fur, partially hidden ears, and short tails. Unlike moles and shrews, voles have round, blunted noses and sharp, chisel-like teeth that they use to chew grasses and other herbaceous plants, tubers, bulbs, and tree barks. Their paws are well-suited to digging, which allows them to create large burrows and tunnel systems. The average size for adult voles falls between 5 and 8 inches.

The 23 different species of voles that live in the United States mostly prefer to inhabit areas with heavy plant cover that shelters them from their natural enemies, which include hawks, owls, coyotes, and cats. Preferred habitats include grassland prairies, sagebrush prairies, marshes, meadows, forests, and stream banks. Burrows often contain nests lined with grass clippings and other soft plant materials.

Since manmade structures lack groundcover and sufficient plant material, voles do not typically enter human homes. However, they do frequently enter yards. Their presence is easily detected thanks to the pathways they create leading to and from their burrow entrances. Yards with gardens, unkempt grass, or overgrown groundcover make enticing burrow sites for voles.

Voles do not directly harm people, but they can devastate crops, gardens, lawns, golf courses, and irrigation systems with their burrowing and feeding habits. The animals have also been known to damage young trees and orchards by gnawing at bark and chewing saplings. Like many rodents, voles are capable of carrying diseases, but they are not a significant source of illness.

Saplings and young trees can be protected by covering them at the base with cloth, plastic, or wire mesh. Keeping lawns and grassy spaces mowed, trimmed, and weeded also helps discourage vole populations. Fences at least a foot high and buried at least half a foot underground often prove effective at keeping the rodents out of gardens.

For the most part, voles are classified as protected non-game animals that may only be trapped, removed, or destroyed if they pose an immediate threat to health or property. Since the effective removal of voles can be difficult, wildlife control experts should be called to handle the problematic rodents. Critter Control professionals have the training and experience to successfully rid residential and commercial properties of vole infestations.

Request a Quote
Voles
Tunnels in the grass? Mouse like rodents in your shrubs and landscaping? Those scurrying little critters may well be voles. Call Critter Control today for effective vole removal and exclusion services.
Call Us Today For An Onsite Estimate
253.343.0412
(No Cats & Dogs)