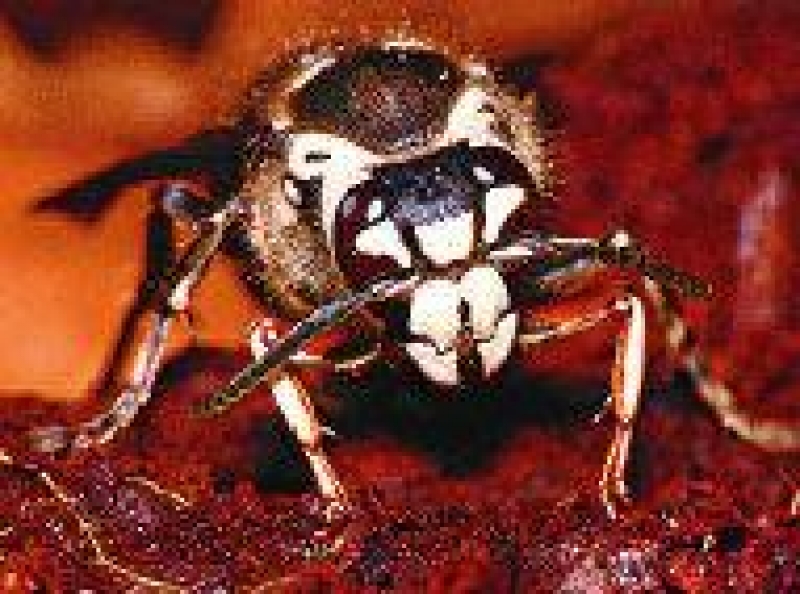 Bald-faced hornets (Dolichovespula maculata), in fact are not hornets. They are indeed yellow jackets. The only hornet species in North America is the European Hornet. Due to the size of the bald-faced hornet, shape, and coloration, these wasps are most commonly mistaken for bees.

They are considered to be very helpful to maintain natural ecosystems, and help with the pollination of many plants. Their primary diet consists of soft meats such as caterpillars, spiders, or aphids, but they also consume nectars and sweet juices. For this reason, they are also attracted to carrion (dead animal remains). Bald-faced hornets are also known to be very aggressive and have smooth stingers which allows them to sting their opponents repeatedly. When threatened, they will sting their opponents and sometimes even squirt venom out of their stinger at them. This venom can temporarily blind the attacker, and causes severe pain.

The bald-faced hornet is most commonly found in the Southern region of the United States. Their natural territory however is spread out all the way into Canada. These stout-bodied social wasps are black with white markings on the front of the head and the tip of the abdomen. The face in primarily white with dark eyes. Front wings of hornets and other Vespidae are folded lengthwise when at rest. The large antennae are conspicuous. In the spring, the bald-faced hornet queen collects wood fiber to make her nest. Some of the fiber can come from houses, or fences. The gray paper nest can be found suspended from structures or trees. An opening at the bottom of the nest is how the wasps go in and out. These nests are built every year, and typically are destroyed or abandoned.

Queens are the only members of the colony able to survive the winter. In April or May, each queen selects a suitable location, constructs a small nest and begins raising sterile daughter offspring. These workers take over the duties of enlarging and maintaining the nest, foraging for food, and caring for the offspring while the queen functions only to produce more eggs. The queen wasp lays all of the eggs in a colony. And the queen is the one to fertilize each egg, although sometimes she will choose not to fertilize an egg. These unfertilized eggs will become drones, males with no stinger. A mature colony consists of 200-400 winged infertile female workers, brood (eggs, larvae, or pupae) and in late summer, reproductive females and males.

Typically bald-faced hornets are not damaging to structures; however they can get pesky when their nest is in your eaves, or a nearby tree. They become very aggressive when they feel their nest is in danger. For pets or residents in the home, they’re in danger of multiple stings and possibly being attacked with the bald-faced venom which causes temporary blindness and pain.

The best preventative measures when trying to control bald-faced hornets, are to make sure you’re checking areas frequently around your home. If you can take care of the problem early, it can prevent an infestation in the future. When the weather begins to warm in the spring is when you should start checking around your home. If you do find yourself face to face with a wasp nest, use extreme caution when treating. Professional pest control operators should be called for any interior nest situations to avoid any bodily attacks by the hornets. Most aerial and ground nests can be controlled with aerosol pesticide products that may require more than one treatment. The best prevention is to spray the nest as soon as it is discovered and not allow it to grow in size. When dealing with situations inside the home, such as hornets in a wall or attic, it is best to treat for the hornets and close up the entry points from access in the future. If treating the nest using one of the described ways, it’s best to perform this at night, when wasps are less active and aggressive.