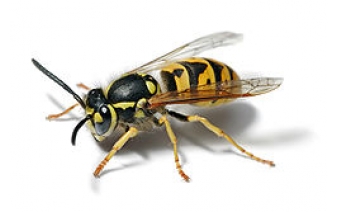 In the Pacific Northwest, yellow jackets and paper wasps look very similar and are part of the same family; however, they do have varying attributes that distinguish one from the other. Most people consider these insects as pests, but they are considered beneficial to the environment they are residing. They collect numerous crop and tree damaging insects to feed their young and kill countless house and blow flies. Fruits and other sweet objects can also be a food source, but insects are a primary for them. As beneficial as they are, we humans do not want them invading both outside and inside our homes, which these species do all too often.

There has been a recent study that suggests that these social insects are able to see and remember each other. The Polistes fuscatus, known as the northern or golden paper wasp, has the ability with great accuracy to recognize and remember fellow colony member’s faces. This ability, much like our own, helps them to see friend/family from foe. There is a higher use of this ability in multiple queen nests, which individual wasps remember who is who, who did what and which is in charge.

The predominant yellow jacket species in Washington State is the common yellow jacket, also known as Vespula vulgaris and the common paper wasp species is the German wasp or Vespula germanica. These two particular species have similar coloring and, from a distance, similar body types. However, yellow jackets are about ½” long with a short and stocky body. The paper wasps, along with most wasps, are slightly longer, about ¾” long and have a slender body shape.

She then creates a small nest and lays a few eggs that she will have to protect and forage for by herself. When the larvae become old enough they will become worker bees (always infertile females) and care for additional eggs and larvae for the queen. During the peak season of these species, new males and reproductive females are produced from reproductive cells. They will emerge and mate. The males die, while the inseminated females find nest sites and start the process all over again.

Both species build their nests out of wood fiber; however, the yellow jacket nest consists of multiple stacked combs that are completely enclosed by a thin paper-like sheet and the paper wasp nest has a single comb that is not enclosed. Yellow jackets and paper wasps do not reuse their nests the following year, although paper wasps may build a nest next to a previous one.

Most species of yellow jackets use underground rodent burrows or other soil openings to house their nests; thus causing a problem for homeowners in their yards or if a nest is formed near the house underground.

Paper wasps generally create nests in the air, but can be located under rocks. This species is more known to take residence in eaves, under roof shakes, attic spaces or walls. They pose more of a nuisance to homeowners because they are more likely to nest in the living spaces of homes, sheds and even bird houses.

Most aerial and ground nests can be controlled with aerosol pesticide products that may require more than one treatment. The best prevention is to spray the nest as soon as it is discovered and not allow it to grow in size and bee/wasp population. When dealing with situations inside the home, such as wasps in a wall, it is best to treat for the wasps and close up the entry points from access in the future. Professional pest control operators should be called for any interior nest situations to avoid any bodily attacks by the wasps.