Also called copyu, nutria are native to South America. Brought to the United States in the 1930s for their valuable fur, the animals were introduced to the wild and are an invasive species. They now inhabit areas of the Pacific Northwest, the Gulf Coast, and the Atlantic states. Notorious for repopulating quickly, nutria are found in new habitats with regularity and cause damage to various crops, vegetation, and wetlands across the country. 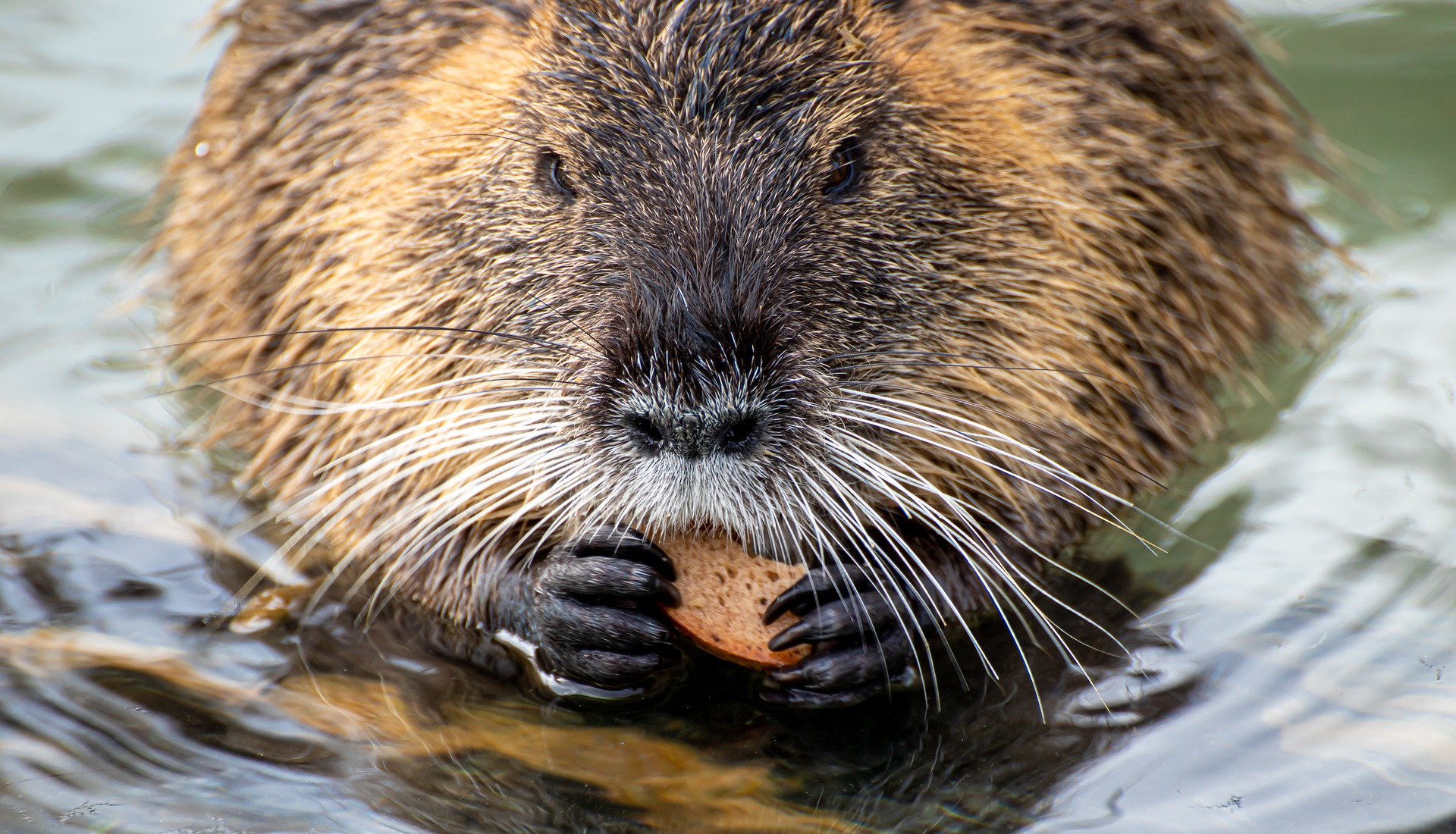 Nutria have coarse yellow-brown to reddish-brown hair on their top coat, while their underfur is denser, soft, and gray in color. With triangular-shaped heads, small ears and eyes, and noticeable orange-tinted incisors, nutria look similar to large, stout rats. The rodent grows to an average of 2 feet in length and weighs as much as 20 pounds. They have longer hind legs than front, and their back feet contain four webbed digits and one free, while their front feet are not webbed at all. Unlike the similar looking beaver, nutria have long, round, nearly hairless tails and pronounced white whiskers.

Inhabitants of marshes, lakes, and streams, nutria prefer fresh water to sea water and live along shores where they dig burrows or take over dens that once belonged to muskrats. Strong swimmers, nutria spend an abundant amount of time in water searching for food and avoiding predators. Nutria can even be found in urban areas living in storm drains, under buildings, and on golf courses.

As semi-aquatic rodents, nutria do not typically enter human homes or yards unless such tenancies border typical nutria habitats. Nutria found in urban and suburban areas may den in drainage ditches or along stream banks.

Most nutria damage is caused when the rodent burrows and penetrates dikes and irrigation facilities. Their burrowing can also weaken river banks and cause flooding. Additionally, the rodents girdle large ornamental and orchard trees, which damages the growth of such plants. Their feeding habits may strip wetland areas of vegetation, which causes widespread damage to already fragile ecosystems. Farm crops are not safe from nutria either, as the animal feeds on rice, sugarcane, corn, wheat, barley, and oats, greatly reducing yields each year.

Nutria can birth up to three litters each year, which leads to exponential population growth in affected areas. The rodent is not a good climber, so exclusion methods like fencing prove effective. Like other rodents, nutria can carry disease, including tuberculosis and septicemia, which can be harmful to humans and other animals alike. Parasites such as tapeworms, blood and liver flukes, and nematodes can be found in the urine and feces of nutria and contaminate water supplies where the animal lives.

Individuals should never try to trap and remove nutria on their own. As the animal may be carrying a variety of pathogens and parasites, mishandling can lead to serious health risks. Contact a trained wildlife specialist to remove and humanely relocate nutria populations. Critter Control technicians have the knowledge, tools, and training to do so efficiently and safely. Call today: 206.431.6833

Request a Quote
Nutria
Call Critter Control for wildlife control services that will get rid of your nutria problem. We are the wildlife removal and control professionals!
Call Us Today For An Onsite Estimate
253.343.0412
(No Cats & Dogs)